The man who mistook David for Brad 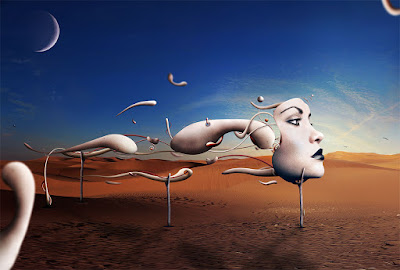 (N.B. This article was originally published in the April 2015 issue of the Mensa World Journal, the official publication of Mensa International.)

In the comic Naruto, there is a character who cannot remember other people's faces, and he is usually being made fun out of that. It may well be that this idea stemmed from somebody whom the author had encountered. Indeed, there is a formal medical term for this disability in the real world – prosopagnosia.
Prosopagnosia, or face blindness in laymen terms, is a condition where individuals have difficulties in identifying people's faces. Of course, everybody has some problems with remembering faces at times, so the condition can be understood as performing below a certain threshold of a spectrum of varying degrees of facial recognition abilities. However, if you are prosopagnosiac you would easily have problems with following the dialogues of protagonists in a movie, and rely heavily on non-facial features such as hair style, physique and voice to distinguish between people. Once these features are concealed, you are lost in the woods. Moreover, when it said identifying people's faces it literally means everybody, including your own families – in the most extreme cases, prosopagnosiacs cannot even identify themselves in the mirror. This is the case for famous neurologist Dr. Oliver Sacks who, ironically, wrote the neurology classic The man who mistook his wife for a hat which describes a dozen of bizarre neurological disorders. If you are curious, look up this 60 minutes episode at here.
Indeed, prosopagnosia has been known for more than 50 years in medical literature. Cases were that people suffered from a head injury then lost the ability to recognize his/her close acquaintances. However, only until recently it has been discovered that the condition can be congenital (inborn) and surprisingly common – it is estimated that about 2% of the whole population has varying degrees of this condition. Even our great actor Brad Pitt admitted he has this condition. If you are interested in testing it yourself, click here.
The reason I brought up this topic is because I strongly believe I have mild prosopagnosia. While I can recognize my close friends and family members, most of the time when I ran into someone on the street it was the other person calling me in the first place, for me either not having a clue of who he/she is or not being sure if I recognized the right person. Once in a while I cannot recognize the famous actors/actresses on TV or in movies. Last but not least, it has always baffled me how my friends can spot celebrities on the street, and to me being paparazzi seems more difficult than to win the Nobel Prize. Moreover, my mum is at least as faceblind as I am, so I suspect I inherited this trait from her.
I believe the discovery of congenital prosopagnosia has important repercussions on many aspects. First of all, we can imagine some people act shy because of their faceblindness rather than their inherent personality. This is analogous to dyslexia, where people with neurological difficulty in reading are mistaken for being lazy or stupid. So there should be obvious needs for intervention from clinical and educational psychologists. Secondly, job recruitment and human resource sector should really take this ability into accounts when assessing their candidates – hiring a faceblind person to be a security guard/policeman would be both a funny and serious problem. On the other hand, super-recognizers (those who are can spot people even after decades) can be harnessed for public relations, journalism, security intelligence etc. Also, needless to say this will have a huge impact on legal issues, as it determines the credibility of eye witnesses given their facial recognition abilities.
Last yet what I believe to be the most important reason for studying prosopagnosia, is that it may shed lights on the evolutionary process of human being. As it is estimated about 2% of the population has the condition on average, it would be interesting to know how it varies in different demographics. In particular, I am curious to know if there would be a correlation between prosopagnosia and IQ. As a Mensan myself, I seem to have met a disproportionate number of people at Mensa who claimed to suffer from this condition. Maybe somehow the dots are connected?
臉盲 Brad Pitt faceblind faceblindness Mensa Oliver Sacks prosopagnosia