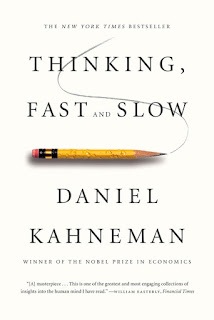 The title well deserved the acclaim as a landmark work in the realm of economics.
Consolidating decades of research finding in behavioural and cognitive psychology, Kahneman, along with his lifelong fellow Amos Tversky, shapely pinpointed the shortcomings of the contemporary doctrine of economics, i.e. the ideation of human being to the so-called "Econ", someone who is always consistent in his or her preferences and know exactly what he or she wants all the time. As demonstrated by the monumental evidence in the book, human beings are, through the instinctive "System I" and to some degree the endorsement of the deliberative "System 2", far from rantional in that sense. Numerous phenomena under which these errors could occur have been addressed, including priming, framing, the illusion of memory, the halo effect, "What you see is there it is" (WYSIATI), anchoring, availability heuristics…just to name a few.
From there the author diverts the book a little to a statistical discourse, where he discusses the Bayesian reasoning and debunks myths such as base rate neglect, regression to the mean etc. This is understandable given their relation to the cognitive bias, though some readers might find it difficult to follow. Again the narrative fallacy, hindsight bias, validity and pundit illusion as well as planning fallacy in Part III are genuine food for thought for decision makers to carefully ponder.
Part IV enters Kahneman's own brilliant insights - the prospect theory to explain the circumstances under which people generally prefer loss aversion or risk seeking. This, coupled with the endowment effect, mental accounting and other similar paradoxes into which humans would easily fall trap, lay the foundation for behavioural economics that has been influential in recent years. Finally, Part V deals with the questions of subjective well-being, which probably what economy should ultimately be all about.
On the downside, the book is quite mentally draining as a lot of terminology, experiment detail and statistical reasoning have been presented in the arguments - be prepared to engage your System 2 when going through the pages! However, if one wants a succinct summary to preserve his or her cognitive ease, I would highly recommend to read the conclusion, in particular "Econs and Humans" where not only a brief comparison of the two concepts are made, but its implication in the real world and sound application in government policies have been elegantly orchestrated.
All in all, this is a masterpiece if you are into serious logical reasoning of human behaviour. If you are just looking for a self-growth quick-read, it might not be your first choice.
availability heuristics base rate neglect Behavioral economics Daniel Kahneman experiencing self ISBN9780374275631 loss aversion prospect theory regression to mean econs remembering self WYSIATI
位置： Taipei City, Taiwan