Book review: The Girl with the Dragon Tattoo 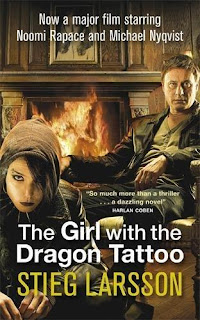 This book well deserves its reputation as being the best crime fiction for over a decade.

It all began with outspoken Swedish journalist Mikael Blomkvist being sent to jail for allegedly defaming local tycoon Hans-Erik Wennerström. During this abysmal point in his life, retired national mogul Henrik Vanger approached him and invited him to Hedeby, a small, seclusive island in northern Sweden inhabited by the Vanger family. There Henrik offered Blomkvist a strange job - to solve the mysterious missing, or apparent murder, of his niece Harriet Vanger, happening over 40 years ago.

Lured by the exceptionally generous remuneration and Henrik's promise to help avenge Wennerström, Blomkvist reluctantly took up the task and started to investigate Vanger's pedigree members on the island, using the pretext of writing a biography for Henrik. During this mission he requested a capable assistant to help him with information gathering, and here came in the punkish, mute, ghost-like computer prodigy Lisbeth Salander (a.k.a. the girl with the dragon tattoo, though the original Swedish version never adopted this title).

Together the duo slowly unravelled more murders in and around this seemingly tranquil place. Evidence points to the existence of a religious fanatic, a serial killer, and most importantly - someone who exists among the Vanger family. Again, like other classic closed-suspect detective tales Blomkvist eventually discovered the culprit; in doing so his life was put at peril, only to be saved by Salander in the last minute. However, it was also discovered that Harriet was still alive, and with Blomkvist hunting her down she eventually reunited with Henrik. Needless to say with Henrik's help Blomkvist successfully fought back at Wennerström. Despite the dark tone throughout, the story had a happy ending.

The story is great not only because of the entertaining elements of the crime suspense. There is much narration about Sweden's economic and political past, providing an excellent window to glimpse through the nation's modern history. Moreover, a lot has been dwelt on Salander's experience of sexual abuse, and her eventual revenge, which provided both excitement as well as reflection of the issue in our society. Last but not least, the romance between Blomkvist and Salander (and another member of the Vanger family) satisfies the fantasy of most readers, although I am not sure if it is a bit low-taste for a serious crime thriller. But all in all, this book is a masterpiece.
crime fiction Girl with the Dragon Tattoo Hedeby Hedestad ISBN9781906694661 Lisbeth Salander Män som hatar kvinnor Mikael Blomkvist Stieg Larsson