Book review: The man who mistook his wife for a hat and other clinical tales 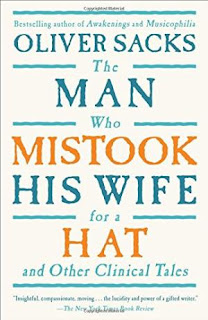 A classic piece in brain science written by renowned late psychologist Oliver Sacks. The book consists of a dozen bizarre clinical cases of brain malfunctioning encountered by Dr Sacks, as illustrated by the book title. While some of these cases are due to congenital defects, some of them are due to head injury and some due to brain tumor or diseases.

All in all, I find the most intriguing the case of anterograde amnesia, as manifested by the severely handicapped Jimmie G. in the The Lost Mariner. The stark contrast between his memory deficiency and his intact intellectual ability is fascinating to behold. This reminds me of the iconic patient H.M. as documented in every memory and cognition textbook, the British composer Clive Hearing whose story has been shown on BBC documentary, as well as the fictional character Leonard Shelby in Christopher Nolan's masterpiece Memento. This demonstrates how the very sense of identity, or existence, could be torn apart by removing one's ability to form memories. Of course, the case of Dr. P who developed the visual agnosia while able to communicate perfectly in sounds also sheds light on the basic inner-workings of the most complex machine in the universe.

The book is highly enjoyable read, not only because it has illustrated the most extraordinary cases of mental abnormality, but also because of the humanistic perspective Dr. Sacks approached them. As he stated himself in the book, while being a neurologist, or scientist in general, he also feels the need to connect to the patient personally, rather than treating him or her just like an experimental subject. I am particularly moved in the story A passage to India, about a young girl who unfortunately developed a malignant brain tumor. The seizure she incurred from the disease, however, miraculously brought her sweet old memories of her faraway home and calmness, which accompanied her to her final journey of "returning home". A similar care of the author to his clients was also evident in the last section on the mentally challenged subjects.

This book is highly recommended to anyone who has a keen interest in psychology and neuroscience, as well as those who work in the sector of special education.
amnesia autism faceblind ISBN9780684853949 Korsakov mental disabilities Oliver Sacks phantom limb prosopagnosia The man who mistook his wife for a hat