Book review: What every environmentalist needs to know about capitalism 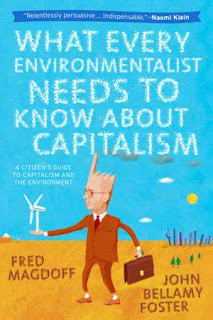 In short, the writer is skeptical about all sorts of technological solutions, thinking they either entail other negative effects, are not sufficient to tackle the scale of the problem, or  even if successful at improving efficiency, these solutions will simply increase resource consumption as spellbound by the underlying logic of capitalism. Hence the only road to salvation is to adopt a socialist system coupled with a democratic society where local people decide the use of resources themselves instead of leaving it to the hands of the market. The writer cited Cuba, Venezuela and Bolivia as successful examples of such planned economies, where environmental and social well-being are maintained.

Although such utopian societies seem very appealing, I am doubtful if the Latino-American socialist systems are being romanticized. In my opinion, it is difficult to maintain democracy in a planned economy, because the latter inevitably implies an authoritative figure making decisions for the community. There will never be a decision where everybody is happy, which means somebody will always be forced to follow the decision made by others, and that essentially goes back to an authoritarian notion. Having said that, it may still be a better approach than the totally uncontrolled monster of capitalism.
capitalism Climate change economics environmental disaster Fred Magdoff ISBN9781583672419 John Bellamy Foster socialism