Book review - Bad Samaritans: the guilty secrets of rich nations and the threat to global prosperity 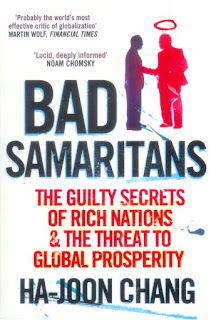 Citing historical evidence, the author argues against the neoliberal ideology and free-trade policies so pushed forward onto the developing countries by the "Bad Samaritans", in particular the World Bank, IMF and WTO. He claims that contrary to what general people believe, the adoption of a protectionist policy was closer to the truth for the economically successful nations to become what they are nowadays.

Moreover, he uses some interesting yet convincing arguments to pinpoint the problems of the current globalisation movement. The example of likening pushing children into the workforce to forcing developing countries to prematurely open the markets of their infant industries is compelling. In the final chapter, the books actually goes beyond economics and examines some of the so-called cultural stereotypes of the people in developing countries, rebutting the unjustified claims of their economic underdevelopment being due to their national characteristics.

On the down side though, while agreeing with most of the issues raised by the authors there are a few points which I find not very convincing. Such examples include his rather neutral stance on corruption and his advocacy of promoting manufacturing industry as the primary goal of developing countries. Nonetheless, in overall I would say this book is a mentally stimulating and entertaining piece of work that anybody interested in this hot global debate should look into.
globalization movement IMF ISBN9781905211371 neoliberalism World Bank world trade WTO