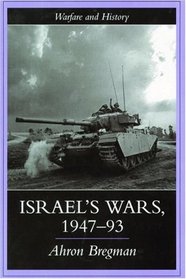 For somebody who wants some insider knowledge about the warfare history of one of the most politically unrest countries in the 20th century, this book should be a good choice. The author has been studying Israel's history for years, in its military sense in particular, and presents the story of the country from right before its establishment in 1948 to the last decade in the 19th century. While academic discussions about the factors leading to each of its wars are addressed, the flows of the wars are described with interesting first-hand, covered-up details. Highly recommendable for warfare maniacs.
1947-1993 Ahron Bregman ISBN0415214688 Israel's wars