Reflection from Thinking: Fast and slow.

If I were to include a handful of books to in the "must-read" list in the past decade, Thinking: fast and slow by Daniel Kahneman would definitely be on top of it. 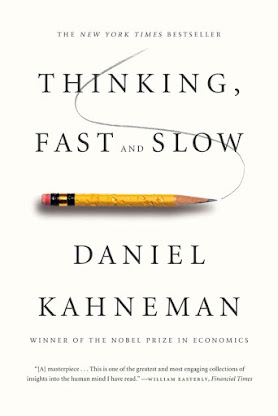 As a psychology graduate myself, I have always been fascinated by the theories and experiments which try to unravel the mysterious innerworkings of our brains. On the other hand, traditional economists try to understand how homo economicus make decisions to maximize the value of utility of his/her resources, assuming humans are always rational without questioning this fundamental premise. How this book debunks the myth behind this assumption is a great eye-opener. To pay a tribute to this, I am writing this article to reflect on some of my thoughts inspired by it.

I think everybody can relate, using his own words, with "cognitive ease", the concepts of System 1 vs System 2 introduced in the first section. It is the common intuitive vs deliberate, slow vs fast, rational vs emotional dichotomy. Although the author refrains from materializing the two systems to physical locations of the brain, I cannot help but visualize them as the limbic system and prefrontal cortex respectively. Indeed, these notions conform to findings during the neuroeconomic experiment in Chapter 34. What would happen, I wonder, if we try to use biofeedback to train people with strong cognitive bias to think more with their frontal cortex instead of the limbic system.

In the second section, the statistical lesson is a blast. At first glance, I could not get my head around why assessing the future performance of a certain candidate by his or her current performance is an heuristic approach. Only when the idea of regression to means is introduced to the scenario did I start to see the underlying issue there. I find this insight echoing with the conundrum that why incompetent people are more often than not drafted for a job position in the bestseller The Peter Principle -  the impression from a job interview is a heuristic to the real question of capability. This, together with the other cognitive biases such as base rate neglect and priming, explain a lot of our misjudgment in the real world.
For the third section, the illusions of understanding and validity remind me of the fable of the naked emperor. While the pundits are frequently giving forecasts that have failed to substantiate miserably, audiences are still happy to believe them for the sense of security. No need to look far beyond: the Internet-frenzy of the Indian child prophet Abhigya Anand in predicting how COVID-19 scenarios will develop is hindsight bias at its utmost manifestation.
As for the outside view, it might be a necessary self-defense mechanism in order to live through our life. Taking the outside view to the extreme, we might realize we are just one of the billions of people living on this planet today, which is in turn one of the trillions of the planets in the universe, which has in turn existed for eons. Realizing our negligible existence might render ourselves completely paralyzed in doing anything, which I believe is where existential depression stems from, and from which I personally suffer a great deal. Just like the author says in Chapter 24: "When action is needed, optimism, even of the mildly delusional variety, may be a good thing." Depressive realism feels like a cynical Greek tragedy.
Perhaps the most central idea of this title lies in the fourth section which features the author's brilliant prospect theory. I have just experienced a strong effect of loss aversion a few days ago when I fell victim to an Internet fraud and lost around USD530 to a jerk. While I was comforting myself by thinking that I had earned some windfall profit of about the same amount elsewhere, the pain did not quite go away.
I would like to speculate that we inherit loss aversion due to our hardcore belief of progress with time. As we move along our life, we are expected to accumulate things - be it relationship, achievement, wealth, etc. Therefore a loss of something in life has to be compensated for something much larger, or we will not be accumulating anything.
Maybe the belief of progress in life can also partly account for the remembering self and life satisfaction as illustrated in the last section. So long as we move up the ladder and end with a better position than we are to begin with, we consider it a success. On the other hand, if we end up worse than where we start with we deem it a failure. Perhaps this progress in life belief is at work for such phenomena as well as the loss aversion effect.
Finally, I want to argue one important economic ramification of the prospect theory is our unjustified pension systems. When a person retires, his/her pension would usually be proportional to his/her last salary, which would probably be quite high given that he/she might have worked a very long time in the organization. Usually the grounds for this is to "ensure a similar standard of living" of the retired person. However, what obligation does the organization have to ensure this if the person is, say, two decades into retirement? Clearly loss aversion is in action here: people want to preserve their status quo after their transition to a new phase in life. This I believe, to be frank, is at a high cost to the rest of the society.
I agree that seniors need social security to protect their life at ripe old age, but I believe this should be out of a humanistic point of view and equal for everyone. In other words, pensions should be universal for everyone regardless of their final salary or position in the organization, much like unemployment security should not be tied to the salary the person last earned. In fact, people with illness or disabilities, rather than higher final salary, should be entitled to more benefits in the healthcare system. If they want to ensure a similar standard of living after their retirement, they should do so out of their own savings at their own will. To ensure this by grandfathering the pension instead, in my view, has not only violated the idea of fairness but also created unnecessary competition towards the end of the career ladder.

These are some reflections I have after reading this magnificent work. Maybe in the future I will come up with more. But for now I want to conclude this article with my appreciation for the author to have prospered, if not launched, such a groundbreaking and interesting subject as behavioral economics into the mainstream school of thought.